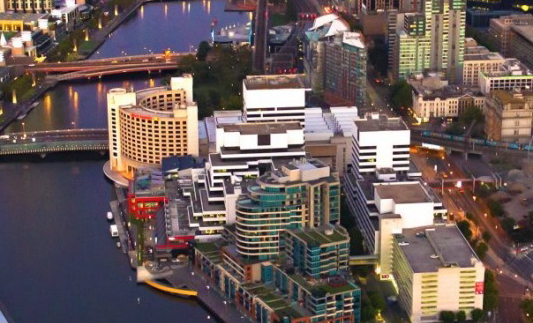 At that price, the initial yield on the mooted deal is around 7 per cent.

On the southern flank of the CBD, the Flinders Street building is entirely tenanted by the police force, which is due to leave in 2020 to occupy a new home being developed by Cbus Property on Spencer Street.

Anton picked up the Flinders Street building four years ago, as part of a portfolio of assets it acquired from Morgan Stanley’s Arena portfolio before putting it on the market early last year.

With about 25,000 square metres of office space, the multi-storey tower sits on a land parcel of around 5000sq m.

That makes the property a prime redevelopment opportunity amid a small cluster of towers on the north bank of the Yarra River where considerable activity is already under way.

The old convention centre, half a block from the Victoria Police building, has already been demolished and has approval for a 1100-apartment development.

The deal with Zone Q is being brokered by Knight Frank’s Paul Henley, Martin O’Sullivan and Ben Schubert.

Zone Q is the Australian arm of Chinese player JiaHe JianAn Group. It has become increasingly busy since its debut in Perth five years ago with the launch of a 20-storey apartment tower with 102 apartments, “Pinnacle South Perth”.It is already active on the east coast, taking over an office building in Milsons Point, north of the Sydney CBD in late 2016 as well as a development site in Cherrybrook in Sydney’s north-west.

Deal flow has ramped up in the Victoria market in the early weeks of January already.

If the Flinders Street tower changes hands as expected, Zone Q will look to address upcoming vacancy in the tower while potentially mulling redevelopment opportunities in the medium-term.

Also in the neighbourhood, Anton Capital acquired an office tower on Spencer Street, a block up from Flinders Street that had been owned by property magnate Harry Stamoulis for $165 million two years ago before selling it to CBRE Global Investors for $250 million last year.